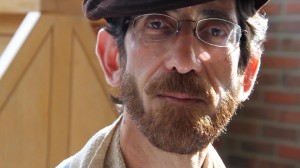 Jeff Volk is a poet, producer and publisher who has popularized the science of Cymatics for over thirty years, having produced a series of videos on Cymatics and re-issuing Dr. Hans Jenny’s groundbreaking books (Cymatics, Vols. I & II), which scientifically demonstrate how audible sound can create harmonic, geometric patterns as found in intricate life forms, and in the sacred art and architecture of the world’s Wisdom Traditions. His 1992 documentary, Of Sound Mind and Body: Music and Vibrational Healing, won the Hartley Film Award through the Institute of Noetic Sciences, and its phenomenal success inspired him to produce The International Sound Colloquium, the premier conference exploring the power of sacred sound and healing music.

In 2006, he published Water Sound Images by German Cymatics researcher, Alexander Lauterwasser, and he actively collaborates with artists, composers, musicians, researchers and scientists worldwide. He enjoys distilling this wealth of experience into multimedia presentations and feature articles that have been presented and published worldwide.

His energetic and engaging presentations articulate how the same dynamics of unseen forces, made visible in the realms of physics by Cymatics, are also at play subjectively, in our personal lives. His work spans a wide range of topics, always seeking to offer an expansive perspective that integrates the disparate…in ways that only poetry can.

Jeff is very excited to be introducing Romanian artist and Cymatics researcher, Gabriel Kelemen who will be making his first presentations in the States here at The Cymatics Conference.

Further information may be found at www.cymaticsource.com.

Putting it all in Perspective

Jeff Volk, publisher of the seminal texts on Cymatics, will lead off this final segment of our evening, with A Brief Overview of Cymatics, designed not only to provide a basic understanding of Cymatics, but to put a human face on it, by establishing its relevance to our personal lives. His lively and largely spontaneous program will feature excerpts from his award-winning videos and will debut his new video introducing illustrator, sculptor, and Cymatics wizard, Gabriel Kelemen. Kelemen will follow with a synopsis of how his 30+ years researching Cymatics has led him to develop a new theory of how forms of nature arise from the dynamic polarity of the fundamental structure of the sphere, in opposition to the spiral motion of the vortex.

Jeff will then introduce Howard Levy, Grammy award-winning composer and musician, best known as “that amazing harmonica player” with Bela Fleck and the Flecktones, and now regularly heard as a frequent guest on A Prairie Home Companion. Howard will offer a brief synopsis of The Melody of Rhythm, his eloquent description of how the world’s most widespread musical scales and rhythmic patterns are identical in nature, sharing the same harmonic ratios and intervallic structures.

Both Howard and Gabriel will further elaborate their fascinating and awe-inspiring insights as Saturday evening’s Keynote Presenters, in a one-time-only, not-to-be-missed presentation, lavishly illustrated with Gabriel’s amazing artwork and Howard’s astounding musicianship.

A Closer Look at the BIG Picture:

Imagining our Evolving Universe as a Dance of Structure and Motion

The dynamic pulsation of life permeates the entire cosmos, from the tiniest subatomic particle to the inconceivably slow and deliberate unfolding of the galaxies, and everything in between—contouring the rhythm of the cosmic heartbeat with astounding harmonic precision, each according to its unique mass and particular qualities and composition. Everywhere we look, the eye perceives harmonic structures as patterns or prototypes of forms in nature, in each and every stage of their development—each stage a symbol of becoming—a letter, word or sentence…a paragraph or chapter, within the book of life.

And where there’s dance, there must be music! A melody so delicate, yet so compelling that not one particle can resist its siren song. Unfolding in perfectly measured steps, proceeding in graceful and distinctive stages—this dance of life plays out impeccably.

Just as surely as pollen carried on the summer breeze, in a few short seasons, will coalesce again into the seed—so too (though at a rather different scale of time and space) will stellar dust (ejected in some great cosmic sneeze) eventually again become a spherical celestial body—a sun, a planet…and through a few more iterations of this very same dynamic process, even the very terrestrial body that you find yourself inhabiting right now!

This intricate and astounding process unfolds in measured, proportional stages that adhere to the same laws and principles as music—and of the essence of language. How could it be any different? Can you imagine all that exists around you and within you—this multiplicity of forms—as innumerable manifestations of that same desire to express itself—just so we might enjoy the evidence of our own existence? What a trip!

So if you’ve made it this far, you’ll thoroughly enjoy this evening’s program. It’s guaranteed to stretch your concept of yourself and your place in the cosmos. Oh yes…and what’s this got to do with Cymatics? Everything! As Hans Jenny, the man who coined the term, Cymatics, so adroitly stated, “Once ones eye has been opened to the Cymatic principle, you see it everywhere.” Enjoy the ride!