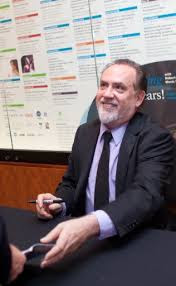 James Oliverio is internationally known as a creative artist, researcher, educator and producer, and is a frequent keynote speaker and consultant to digital media, industry and education programs. He has served as Executive Director of the Digital Worlds Institute at the University of Florida since January 2001, with full professorships in Digital Arts & Sciences and in Music.

Oliverio’s orchestral scores have been commissioned and premiered by ensembles including the Cleveland Orchestra and the symphonies of Atlanta, Columbus, Pittsburgh, and Spokane among others. In 2011 his “DYNASTY: Double Timpani Concerto” was premiered by the Brothers Yancich, timpanists of the Cleveland and Atlanta Symphony Orchestras. Oliverio has also produced for and collaborated with Jazz @ Lincoln Center, the New York Philharmonic, the New York City Ballet and the Film Society of Lincoln Center. He served as Artistic Consultant on a number of projects with Wynton Marsalis, including the Millennial commission of “All Rise”, which premiered with the New York Philharmonic under the baton of Kurt Masur and enjoyed subsequent performances at the Concertgebouw and with major international ensembles including the Boston and Chicago Symphonies. Most recently Oliverio served as Orchestral Consultant to Mr. Marsalis on the “Swing Symphony”, which world-premiered with the Berlin Philharmonic under the baton of Sir Simon Rattle in June 2010, received its American premiere with the New York Philharmonic and then premiered in the UK with the London Symphony Orchestra during the week leading up to the 2012 Summer Olympic Games.

Special recognition includes the International Digital Media and Arts Association (IDMAA) nationally peer-reviewed Award for the “Most Innovative Program 2008” as Director of the Digital Worlds Institute, the Inaugural “Peoria Prize for Creativity” (2005) for producing the globally distributed performing arts collaboration entitled “Hands Across the Ocean” and the “Most Courageous and Creative” Award in the High Bandwidth Challenge at the 2001 global SuperComputing Conference. Oliverio holds five Emmy Awards from the Atlanta chapter of the National Academy of Television Arts and Sciences, along with numerous national grants and commissions. His work in internationally-distributed performing and digital arts has been featured on CNN International and the BBC.

Oliverio’s role in the invention of the NetroNome™ has advanced network-based musical performance to a global scale. He has partnered with research institutions around the world to create “In Common Time” (ICT), a series of globally distributed performing arts collaborations. ICT has been featured in specially commissioned real-time events including “Non Divisi” for the Internet2, at the Los Angeles Convention Center for SIGGRAPH 2005, at the 2006 College Music Society National Conference and the 2007 Ingenuity Festival of Art and Technology. In 2008 the ICT infrastructure supported the global virtual environment linking Africa, China, India and America for the live webcast of the MLK World House from Morehouse College in Atlanta.

Recent activities include directing and producing “The French in Florida (1562-66),” an animated movie based on the 16th century drawings made during France’s brief attempts at settling in the New World; keynotes at the Asian Computer Music Project (Taiwan) and the World Congress of Cultural and Creative IT Industries in Dalian, China. Oliverio served as executive producer for “Icons of Innovation”, an interactive performing arts project incorporating dance, music and digital projection design webcast live from the New World School of the Arts in Miami to participating audiences across the Americas.

Prior to becoming the Founding Director of the Digital Worlds Institute at the University of Florida, Oliverio served as the Artist in Residence at the Georgia Institute of Technology, and also as Founding Director of AudioLab in the Graphics, Visualization and Usability (GVU) Center in the Georgia Tech College of Computing. Previously he served as Visiting Associate Professor of Music and Director of Music Technology at Georgia State University.

American composer James Oliverio will discuss the concept of “Tone Color” before presenting the World Premiere of a new multi-media work based on the aural and visual imagery of Cyma Glyphs. At one end of a virtual spectrum, persons with Sound-to-Color Synesthesia actually see color during their experience of music, often associating specific colors with specific musical pitches.  Other “tone deaf” individuals cannot readily differentiate between musical pitches, but can still perceive the “timbre” (tone color) that differentiates diverse musical instruments.  Professor Oliverio’s new multi-media composition will provide a synthesis of the visualization of sound with the esthetic of a modern musical composition.