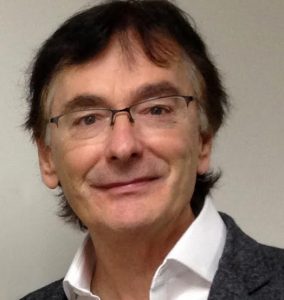 John Stuart Reid is an English acoustics engineer, scientist and inventor. He has studied the world of sound for over 30 years and speaks extensively on his research findings to audiences throughout the United States and the United Kingdom. Inventor of the CymaScope Pro, John’s work is inspired by acoustic pioneers, Ernst Chladni, Mary D. Waller and Hans Jenny and has taken their findings to a new level. His primary interests lie in investigating sound as a formative force and discovering why sound heals.

John Stuart Reid is an acoustic physics researcher. He has studied the physics of sound for four decades and is a respected authority in the field of cymatics. He is one of only two people to have studied the acoustics of the Great Pyramid and in 1997 he conducted a series of ground-breaking experiments in the pyramid’s King’s Chamber which led him to invent the CymaScope instrument, a new type of device that makes sound visible. Having experienced a significant healing of his lower back during his acoustics study of the Great Pyramid he began research into the field of sound healing, which continues to the present day.

My exploration into sound therapy began 20-years ago, in 1997, as a result of a seemingly miraculous healing of a painful lower back condition. The healing of my back occurred spontaneously while I was carrying out acoustics tests in Egypt’s Great Pyramid. Sharing the findings of my research in 2017 feels like an appropriate energetic milestone in my ongoing journey of exploration.

The relief of pain from the acoustics experiment was so dramatic and permanent that I was inspired to begin an investigation that continues to this day. How could severe pain be erased in a space of only twenty minutes simply by being immersed in a pure soundscape? Is sound and music a form of medicine to the body as Pythagoras believed more than two millennia ago? Are we on the cusp of a revolution in energetic medicine? I will offer answers to these questions

as well as seven key aspects of my research into this important area: